In 653 Cedd sailed down the east coast of England from Lindisfarne and landed at Bradwell. Here he found the ruins of an old deserted Roman fort. He probably first built a small wooden church but as there was so much stone from the fort, he soon realised that would provide a much more permanent building, so he replaced it the next year with the chapel we see today!

The Chapel is said to be that of "Ythanceaster" (Bede, Historia Ecclesiastica), originally constructed as an Anglo-Celtic Church for the East Saxons in AD 654 by St Cedd, astride the ruins of the abandoned Roman fort of Othona.

No further record exists of the Chapel's use until 1442 when the local clergy reported to the Bishop of London that it had been expanded slightly, with a small tower above the porch with a bell in it. However, they did not know of its origins and it was unusable, having been burnt. It was repaired and returned to regular use alongside the parish church in Bradwell-on-Sea until at least the Tudor period (16th century) before falling into disuse as a church again and being used as a barn—the position of the wide barn doorway, now filled in, can be seen on the south side of the nave.

During the Napoleonic Wars (1803–1815) communication remained central, as always, and Essex played host to what was then the hi-tech signals technology of the day. This was the semaphore station. Before the age of the telegraph and telephone, the stations provided a method of relaying urgent messages across hundreds of miles of land in the space of a few minutes.

Crews would operate a series of hinged wooden beams at different angles to spell out messages. These would be picked up by the next station in line.
Purpose-built semaphore towers were constructed between the Admiralty in London and naval headquarters in Portsmouth. In Essex, by contrast, use was made of high buildings already in situ.

Among them were the abandoned St Peter’s chapel at Bradwell, and the tower at Saffron Walden castle. Linnetts Cottage, built into the seawall at Bradwell, was used to house the semaphore crew.

The sea approaches to London were guarded by the Nore fleet, anchored in the Estuary about two and a half miles off the site of modern-day Thorpe Bay
New technology took root in this area with the deployment of the new semaphore telegraph stations.

Communications were considered vital in the defence of the country to alert commanders and allow infantry, militia of war ships to be deployed quickly to respond to any threat from single vessels or invading armies.

Initially signalling stations were deployed at 12 sites on the Essex coast which included the small tower at St Peter's Chapel, Bradwell on Sea and another at Tillingham Grange.
The signal towers were manned by a Lieutenant, a midshipman and two seamen who lived in accommodation normally built into the signal towers.

By 1800 the signalling station at St Peter's had been replaced by a mechanical semaphore.

In June 1916 the Parker family who owned the chapel gave it to Chelmsford Cathedral. In 1920 it was restored and re-consecrated. Soon after this the annual pilgrimage started at the beginning of July each year. The day to day maintenance and care for the chapel has always been carried out by the parish church, whose Rector was Chaplain until 2010.
In 1959 it gained the Grade I listed status.

The first altar was made from oak beams from Chelmsford Cathedral that was being restored at this time. This was replaced in the 1980s when a new stone altar was installed with stones from Iona, Lindisfarne and Lastingham. The wooden altar is now in St Thomas church in the village. 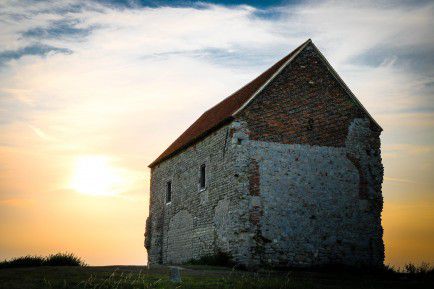 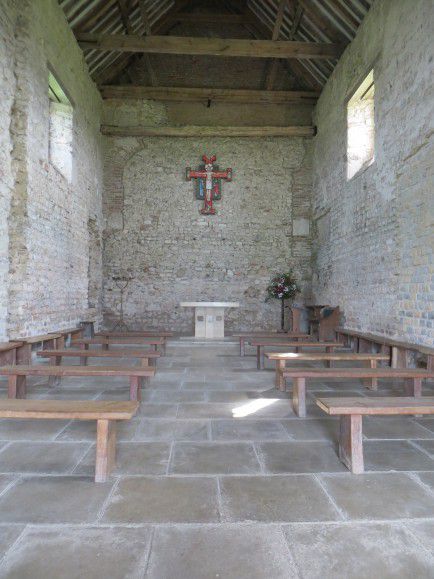