The Roman Fort of Othona

The fort of Othona is in a typical late 3rd-century style, and was possibly constructed in during or shortly prior to the Carausian Revolt, making it contemporary with the forts at Dubris, Portus Lemanis and Garrianum. According to the Notitia Dignitatum, which is the only contemporary document mentioning Othona, the fort was garrisoned by a numerus Fortensium ("numerus of the brave ones").

Othona's location at the edge of the Dengie peninsula was ideal for control of the estuaries of the rivers Blackwater and Colne, the latter leading to the important city of Camulodunum (Colchester). The fort's shape is roughly trapezoidal, with rounded corners. The stone rampart was 4.2 meters thick, indicating a tall superstructure, and enclosed over 2 ha. A single exterior ditch surrounded the site. Although some of the Roman building material was re-used in the 7th century church of St Peter-on-the-Wall, enough of the rampart survived until the 17th century, when it was described by Philemon Holland as a "huge ruin".

Othona is one of 9 forts that were constructed in the 3rd century AD to deal with the threat posed by the Saxon raiders. It is likely that the Fort was built by a Roman Commander called Carausius who for a period revolted against Rome and declared himself Emperor of Britain. Othona was almost rectangular in shape covering an area of up to 4 acres. The fort was heavily defended and would have taken the form of a defensive ditch 8 feet deep and 20 feet wide.

The walls were about 20 feet high and 14 feet wide allowing sentries and defenders to walk the walls. Towers would have been sited at each corner and intervals on the straight sections. The outline of the west wall has been measured at 522 feet long. Then there would have been an inner earth mound and living quarters within the walls probably in the north west quarter. The existing St Peters Chapel is built on the site of the Porta Praetoria which was the main gateway on the western wall.

Transport would have been by road and to the Quay which is believed to have been on the eastern side of the Fort in an area now covered by sea. As the area would have been split between marshland , pasture and heavy forestation it is likely that a road would have been built to allow quick access by the roman soldiers.

East End Road leading to the old fort of Othona

Being marshy East Essex has more than its share of bendy roads but from Othona there are a few uncharacteristically straight sections of road that are out of place considering natural characteristics. There is some evidence to support a road from Othona to the River Crouch near Battlesbridge where there were roman potteries and there was a possible crossing to the Roman settlements and burial ground on Foulness Island.

The road then followed the River Crouch past the Roman Kilns at Norsey Wood, Billericay to join up with the main North South roman road near to Brentwood. Coins and pottery found at the site have dated from 280 AD to 468 AD which tends to indicate that they were built during the later years of roman occupation. Although coins of 24 Emporers from Gallienus to Honoriuus, have been found at this site, many of the coins bear the head of Carausius. Excavations have taken place in 1864 and 1947.

Notitia Dignitatum is a fourth century roman book which records the military dispositions of the empire. Othona is listed as one of 9 forts defending the coast against the Saxon threat. The garrison was not drawn from legionnaires but normally from axillaries drawn from countries colonised by Rome although as time passed they would have been supplement from men drawn from the indigenous population.

The troops at Othona were called the Limen Fortenses who were light cavalry rather than the normal foot soldiers. Perhaps light cavalry were stationed at Bradwell to protect the many valuable Roman Villas and farms that were to be found in the fertile land midway between two of the most important Roam towns of Colchester and London. The roman withdrawal from this island abandoned Othona which by AD 650 was used to build St Peters Chapel. There is some suspicion that flooding from a very high tide in November 1099 may have reduced Othona to ruins from which it never recovered Nowadays there is little to be seen of Othona, about 2m stretch of the lower section of the wall remains although it is covered by scrub land. 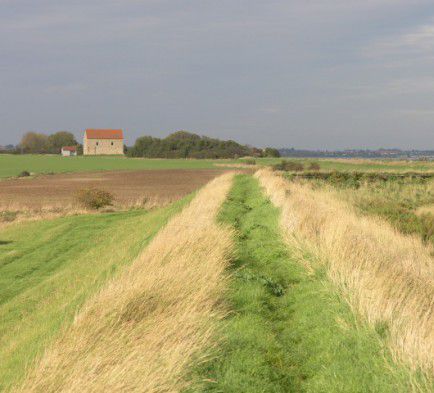